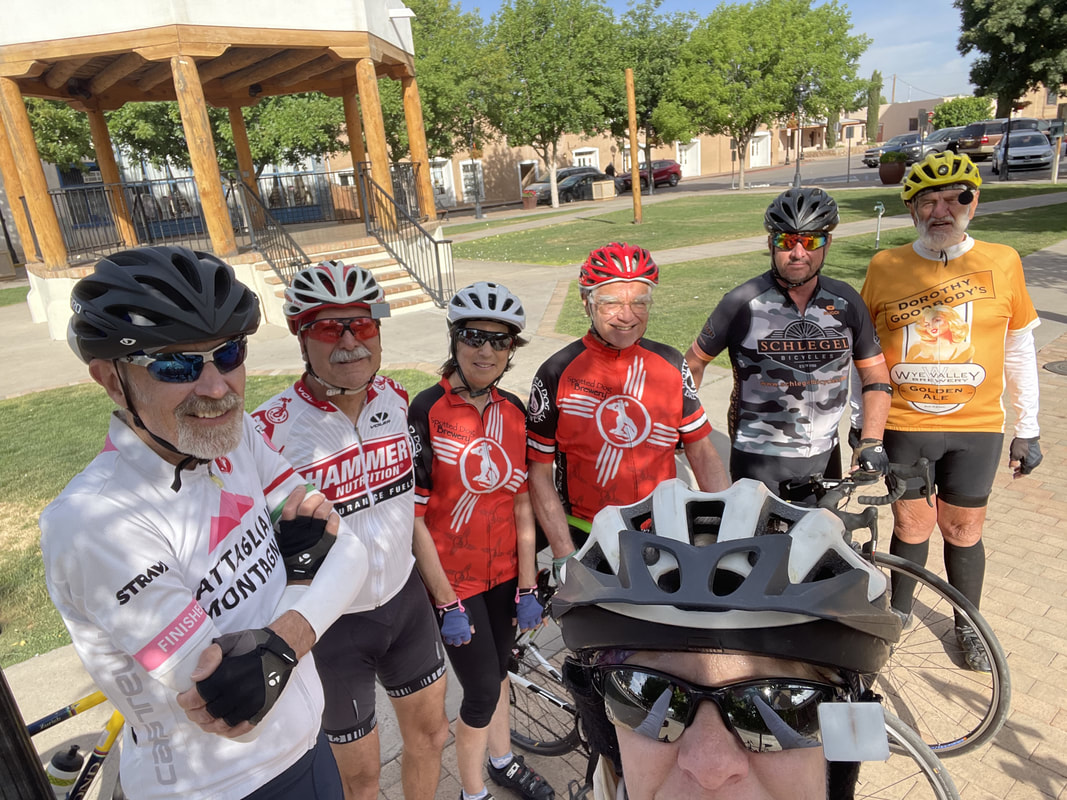 The Bike & Chowder Club has two groups of riders. The A Group meets Sunday, Tuesday, Thursday and Saturday (16 - 20 MPH pace).
The B Group meets Tuesday, Thursday and Saturday. The B Group rides at a stay together  pace (12 - 15 MPH). Checkout the "B’s"
​ FB Page. Depending on who is riding, an A-/B+ Group sometimes forms and rides at a pace between the A and B Groups.

Thursday rides are the most social ones with most riders meeting for breakfast or coffee after the ride. Group A rides a 25 mile loop from Mesilla Town Hall parking lot to FARMesilla or The Bean for coffee/breakfast. Group B rides a 15 mile loop from Mesilla Plaza to Stahmanns and back to Mesilla for breakfast.
​
B Group Rides:
Social, stay-together rides (12 - 15 MPH) leave from the Plaza. For more information call Kevin (712) 269- 1596
or Dona  (575) 647-0757, (651) 398-6778.
Group A October Ride Schedule
8:30 AM Start
The Thursday ride is a slower 15 mph ride to the Post Office in San Miguel and back to the Bean at Jpsefina's via Glass road.
Sunday October 2:  Let’s ride to the Airport first, then Picacho Hills, Shalem Colony, Hill, Coffee at Starbucks by Sam’s.

Tuesday October 4:  Let’s put some rides together, let’s ride Fairacres, to Burke, Taylor, Elks, Engler, Del Rey Settler’s Pass, thru the neighborhoods to Sonoma Ranch and head to the Golf Course, returning on Red Hawk Golf Rd to Peachtree to Holman to 70.  Coffee at Starbucks on 70.

Sunday October 9:  Tellbrook Hills and then south to Mesquite. Return via Hwy 28 - the Bean or FARMesilla.

Sunday October 16:  Ride to Fort Selden via Fairacres, to the top of the Hill for some, return on Dona Ana.

Tuesday October 18:  Let’s ride to Hatch. There will be various starting points for those watching the mileage. The options will be meeting at Fort Selden (the gates will be closed so parking will be outside the perimeter), meeting at the Border Patrol station or meeting at Paul and Terri’s for more miles. The Pepper Pot and Sparky’s are closed on Tuesday SO PACK A LUNCH. There is the Circle K on Franklin that has the Santa Fe Grill and Subway for more water.

Sunday October 23:  4-Way, cell tower, or Afton for those wanting a challenge. Coffee at the Bean or FARMesilla.

Tuesday October 25:  Let’s take the I-10 frontage road to Lords Ranch return via 28.
Sunday Oct 30:  How about Triviz Bike trail to frontage road going east to Sonoma Ranch Road, south on Sonoma to University up to Baylor Canyon going north back to 70 and end at Starbucks by Sam’s?